SO there I was one rainy Sunday doing some admin tasks when my phone rang. The man on the line wanted to know if I would be interested in riding a motorbike through Death Valley in the company of a couple of the people who ran the Italian Ducati motorcycle company. I conceded that I would be interested. “Can you be in Los Angeles tomorrow?” he added, as a kind of afterthought. I thought no, but I said yes … yes, I might be able to do that.

So it was that 36 hours later I was twisting the ignition key of a brand new Ducati, and preparing to ride through the desert from Laguna Beach to Las Vegas, in the company of a small band of high-ranking Ducatisti, all expenses paid. My only commitment was to write about it when I got home – which I duly did, in a piece called Death Warmed Up for the sadly defunct Sunday Business magazine. 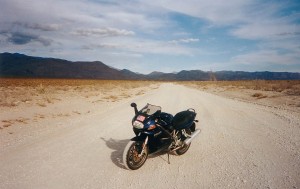 This is not something that happens every day, or week, or year. Some writers make a point of being very cool about it. I once asked a well-known novelist who I had just interviewed if he had had any juicy free trips in the past few years. “Nah, nothing much,” he said. “Well, I did go on tour with Def Leppard. In Korea. But that’s all.”

But the point is, the free lunch is a writer’s occasional reality, even if you are a nobody. It’s free, because doing the writing hardly counts as paying for the lunch. I like writing, I would be prepared to write the story without the free lunch – make the lunch up, as it were.

And in fact on one occasion that is exactly what I had to do. This was also a driving / writing job (a coincidence, no doubt), when three writers were booked by one of the world’s biggest motor manufacturers to write travel accounts based on driving the company’s most expensive cars through twelve famous motoring routes in Europe, the writers doing four countries apiece. One of the other writers was my friend Martin O’Brien, the author of the Jacquot thrillers. The third writer was unknown to either of us.

I went to four countries, and drove some alarmingly powerful cars (people drive around every day in things like this? Crikey! What else do they carry to work? Ground-to-air missiles? Nuclear triggers?). And I produced four stories. Martin went to four countries, ditto. And Writer Number Three … what Number Three did was never 100% clear, but eventually it transpired that one thing that Number Three had neglected to let anyone know was that he did not care for driving, and indeed, could not drive.

That left a bit of a gap in the project, the size of four countries. The commissioning agency begged. Martin and I spun coins for which to do, got out the maps – and made it up. I wish I could link to the results, which were no worse and possibly a little better than the authentic accounts. However, the libel courts being as unpredictable as they are, I think maybe I won’t.