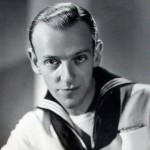 WHO was Fred Astaire? It is one of those questions that turns out to be a lot easier to ask than it is to answer.

A dancer and singer, Fred Astaire starred in 32 Hollywood musicals along with other films, beginning in the Great Depression of the early 1930s, and on to not long before his death in 1987. Although the titles of many of those films are now forgotten by everyone except film historians and hard-core fans, there are also a handful of works that can justly be called unforgettable.

These include musicals such as Swing Time, Shall We Dance? and his masterpiece, Top Hat. In almost all of his most memorable works Astaire was partnered by Ginger Rogers, a lesser artist who by temperament and adaptive talent somehow managed to be both a match and a foil. None of these films was burdened with anything that could be called a credible plot, or dialogue, or characterization. What they did display was a dizzying record of what the choreographer George Balanchine called ‘the most interesting, the most inventive, the most elegant dancer of our times.’

So that is who Fred Astaire was. Yet look a little harder, and somehow Mr Astaire begins to disappear.

He came if not out of nowhere then close enough, born in Omaha, Nebraska in 1899. His background was painfully modest – in fact his story reads like the plot of a Broadway musical about a simple provincial boy who makes it in a Broadway musical. There was a serially unsuccessful immigrant father (‘a bit of a bust,’ is how Joseph Epstein describes him in this book), and a doggedly ambitious mother fixated on show business. It was a gruelling childhood, an endless round of hard work, dreary travel, and no pocket money.

Later in life, Fred Astaire was not inclined to recall those years. In interviews – which were rare – he would just say “I don’t want to talk about it.”

Indeed, he never spoke publicly of anything that touched on the personal. He merely worked exceptionally hard until he became an outstandingly successful stage dancer and singer in partnership with his more colourful sister, Adele. When Adele retired into an aristocratic marriage he moved to Hollywood, worked even harder, became a film star recognised and admired the world over … and that’s all.

If anything dark lay beneath this surface, Fred Astaire kept it hidden. None of the turmoil that routinely attends the film star existence ever seemed to visit the Astaire household. In the diaries and memoirs and gossip columns of the period he may be glimpsed about town, at a Hollywood party or a premiere – but always fleetingly, always impeccably turned out, and always going home early. He was described as the man who ‘was invited everywhere, and went nowhere.’

This elusive, almost invisible quality was more than a mere habit. Self-effacement was the essence of Astaire’s technique. He was an actor who needed to disappear into his art.

For one thing he looked a little odd. His face was too long. His jaw line was wide without being strong. Although he was prematurely bald he could never shake off a look of invincible innocence. He was also on the short side: not exactly the ideal screen assets for an actor competing in a world that included Cary Grant and Gary Cooper.

Yet all of these disqualifications seemed to evaporate when Fred Astaire danced. And that dancing was the result of what must have been the hardest, most relentless work schedule of any Hollywood film actor before or perhaps since. Astaire devised, and choreographed, and rehearsed every last detail, time and time again, right down to the way he might draw his hand from his pocket in a scene – and he expected his partners to work just as hard. In later life Ginger Rogers said that she thought she knew what hard work was – but that was before she met Fred Astaire. “How do you think those routines were accomplished?” she asked an interviewer. “With mirrors?” 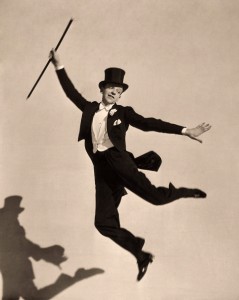 This book from Yale University Press is not a biography, but an account of the place of Fred Astaire in the firmament of great American popular artists. Mr Epstein understands his subject pretty well, knows the Hollywood background, and has plenty to say that is of interest – although it could all have been better said in a quarter of the space. The rest of the text is padded out with repetitions and excruciatingly self-conscious informal asides. It is a reminder that academic publishing meets popular culture at its peril – even in the deftest of hands it is difficult to strike the right tone.

And meanwhile, Fred Astaire manages to elude everyone. In memory and in imagination he seems perpetually to be dancing out of view, perhaps up one of those great curving ballroom staircases that feature so frequently in the Hollywood musical, the audience always hoping that he will stay a little longer and dance a little more.

But as his very name suggests he is the star who does not stay, just like that other man upon the stair – the man who wasn’t there.