Book Review: Pyongyang: A Journey in North Korea by Guy Delisle, Maximum Target by Martin Gower, and The Man with the Baltic Stare by James Church

NORTH Korea is the least-known of nations. That is mainly because North Korea does not want anyone to know anything about it. Perhaps not entirely surprising in a country that has plenty to hide, but in North Korea isolation goes beyond concealment. It has become a way of being.

There are visitors, true. Rigorously-managed tour groups, a handful of aid workers, and mysterious businessmen and ‘investors’ all have some access. But journalists, writers and filmmakers are not welcome. Even tourists have to sign detailed undertakings not to publish anything about their North Korean vacations. For everyone else the story has to be pieced together through tips, hints, off-the-record briefings, and defector accounts.

But there is another way in, via the imagination. Writers of thrillers are finding that the stark contours of this country-sized prison can make a compelling backdrop. ‘Serious’ fiction does not yet seem to be interested in the world’s strangest country, so for now the popular branch has the field to itself.

Not that all these fictional visits to the peninsula have a great deal to tell us about North Korea. A clutch of recent pot-boiling thrillers use the setting, but reveal little. But there is another class of fictions, written by outsiders who happen one way or another to know something about North Korea.

Perhaps the most unusual of these is Guy Delisle’s Pyongyang, A Journey In North Korea. This is the first and so far the only ‘graphic novel’ to tackle life in the DPRK. It is a part-fiction, part-memoir account of the months the author spent working as an animator in a state film studio, all depicted in drab black and white drawings that convey the singular emptiness and mystery of the world’s only neon-free capital city.

Hovering over this crepuscular world is the ever-present image of the Dear Leader, Kim Jong-il, the diminutive, shambling, designer sunglasses-wearing despot who – according to official sources – combines national leadership with the roles of philosopher, writer, operatic composer, film director and self-taught world class golfer. Seldom seen but always present, the day begins and ends with Kim Jong-il. In this reading, Pyongyang is the kind of city where a day-long visit to the museum of presents received by Kim Jong-il seems like quite an interesting diversion. Nothing much happens in the novel. But then, nothing much happens in Pyongyang – if you are lucky. 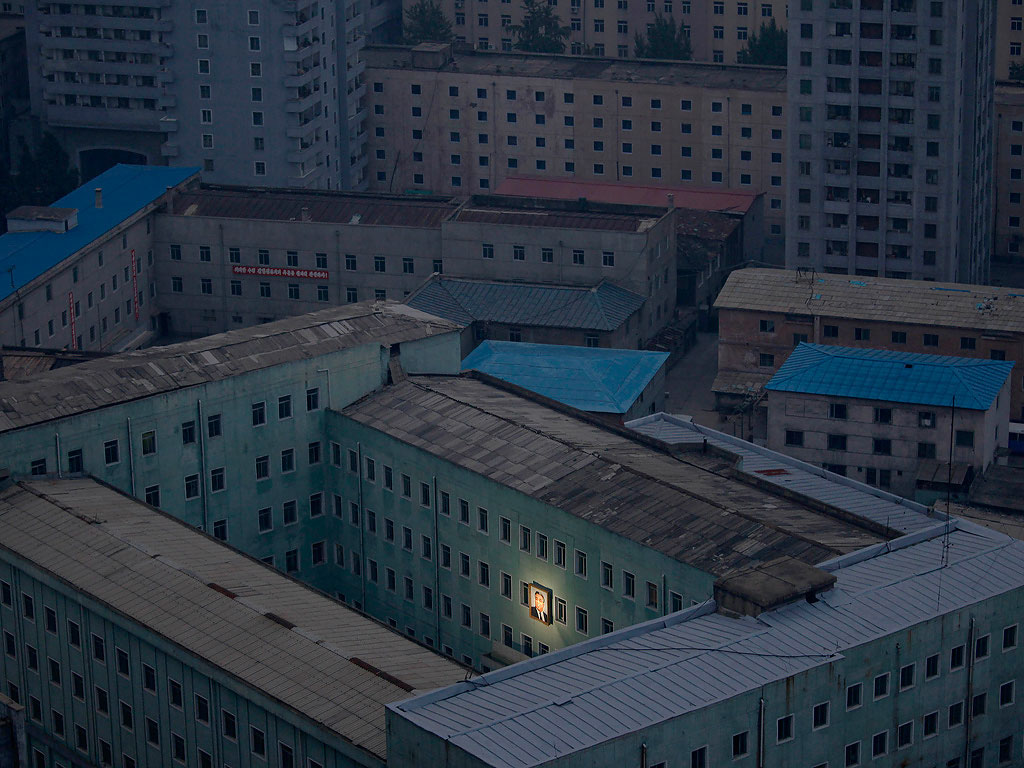 Various characters are not so lucky in Martin Gower’s Maximum Target, a thriller that is the newest entrant in the DPRK genre. Maximum Target dispenses entirely with niceties like the slow accumulation of texture and detail, and hurls the reader straight into a world of Japanese yakuza gangsters, massage parlour girls and North Korean drug dealers, and a conspiracy that ends with an attempt on the life of the North Korean dictator.

Gower’s characters have all the depth that befits the rapid-fire global plot and counter-plot – which is to say, not much. But the text is informed and witty, the North Korean scenes are sketched with what reads like first-hand knowledge, and there is an engaging take on cultural pre-occupations from Marx to Sartre to Bob Dylan, played out against the unlikely skyline of Pyongyang with its empty boulevards and permanently unfinished multi-story hotels.

The same locations albeit seen from a very different angle of view also appear in the remarkable series of crime novels written by James Church – the pseudonym of a former CIA operative in East Asia. Here the central character is a Pyongyang police officer, the likeable Inspector O, who knows that in North Korea mysteries are never solved, just absorbed into larger mysteries.

The first of the four Inspector O novels – A Corpse In The Koryo – is the least assured, but in some ways the most original. In this world the crime is never the centre of the mystery: daily life is the mystery. Much of the story consists of the Inspector’s attempts – never entirely successful – to join the dots between one inexplicable event and the next, and connect them all to the murder of a foreigner that may or may not have taken place in the Koryo Hotel.

Since James Church keeps his own counsel, we don’t know how he comes by his information – but the scenic details and atmospherics suggest more than a passing acquaintance with the realities of life in North Korea. The next two novels – Hidden Moon, and Bamboo And Blood – see the series develop a subtle, indirect satire on a state that is too bizarre for comedy. Finally, in last year’s The Man With The Baltic Stare, Inspector O is called out of retirement to investigate a murder in Macao, where it eventually becomes clear that the job is not to solve the crime, but to obscure it.

This is police procedural North Korea style – fully inverted. It’s not what you do that lets you get by in North Korea, it’s what you don’t do. Or as Martin Gower puts it, it is something like jazz – the notes you don’t play are the notes that count.