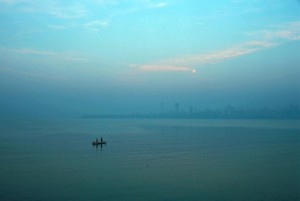 INDIAN fish can be quite dangerous.

I learned this at first hand, sailing a rented catamaran on my annual hippie-holiday in southern India. One moment all was calm, the sea surface as dark and quiet as a dish of lukewarm dhal. And then there was a fizz, a flash – and four or five long silvery things of the swordfish sort launched themselves, whoosh, right across the boat. They were just fish, but they might as well have been rocket-propelled cut-throat razors.

Did we suffer fish injuries? Okay, no. But we might have been sliced to pieces. ‘What the hell were those things?’ I asked back on shore. ‘Those flying fish things?’ Answer: no idea. Don’t know what you are talking about.

Now an Indian writer has had the idea that following the fish trade and the fishing culture around the coastal states of India would be a fine way of uncovering an unseen side of the sub-continent. This is one of those ideas that is designed to appeal more to a commissioning editor than to a reader – and preferably a commissioning editor who doesn’t know a whole lot about India. Because one of the strange things about river-worshiping India is that India and water (remember, fish live in water) just don’t seem to get on together.

For a start, a very large proportion of Indians don’t eat fish. The Indian heartland is the great Gangetic plain of northern India, populated largely by vegetarian Hindus who eat no flesh of any kind, including fish. And why would you eat fish? Most of India’s 1.2 million square miles happen to be an awful long way from the sea, leaving only the option of freshwater fish plucked from some of the world’s dirtiest waterways. Fish and filth are not really a great mix.

Further south things are different: different, but not that different. There is plenty of fish cookery on the coasts of southern India – and some of it is very, very good – but still you find that strange disinclination to get too close to the water. It is quite possible to visit a fishing village in Goa or Karnataka, in Kerala or Tamil Nadu, and find that not one person in the place can swim, including the fishermen. 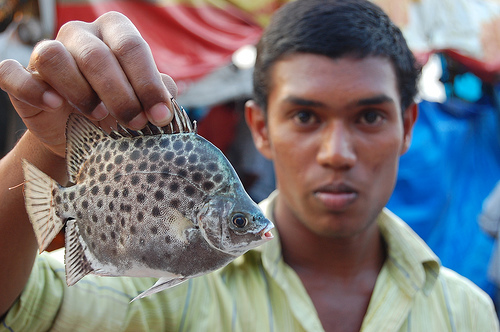 This is a puzzle. Here is India, over 4,500 miles of coast, oceans teeming, thousands of years of seaborne trade in the blood (Mumbai, the business capital, was originally a handful of fishing villages), but somehow India turns its back on it all. Scan the ocean horizon, and you will barely see a sail.

Maybe this goes some way to explaining why the scenes in Following Fish tend to go off at half-cock. The author never seems to be in the right place at the right time. He goes to Calcutta for the season of the hilsa, the migratory fish with habits like a salmon but many more bones, but he shows up too early (yet too late to catch the sight of the market burning down). He tries to sample the famous fish cuisine of the Bengal Club, but they won’t let him in. He swings down to Tamil Nadu but gets side-tracked, the fish idea seemingly forgotten. He finally manages to get aboard a boat in search of the fearsome sailfish, but the sailfish are not interested.

The idea is to capture a sidelong, waterfront view of India, in its confusion and strangeness. But nothing seems to go quite right for this poor author who describes himself rather accurately as ‘a directionless eater’: appointments are forgotten, the programme usually doesn’t pan out, romantic glances are exchanged but nothing transpires, and the project tails off with an air of unfinished business. As a picture of India it is all rather authentic.