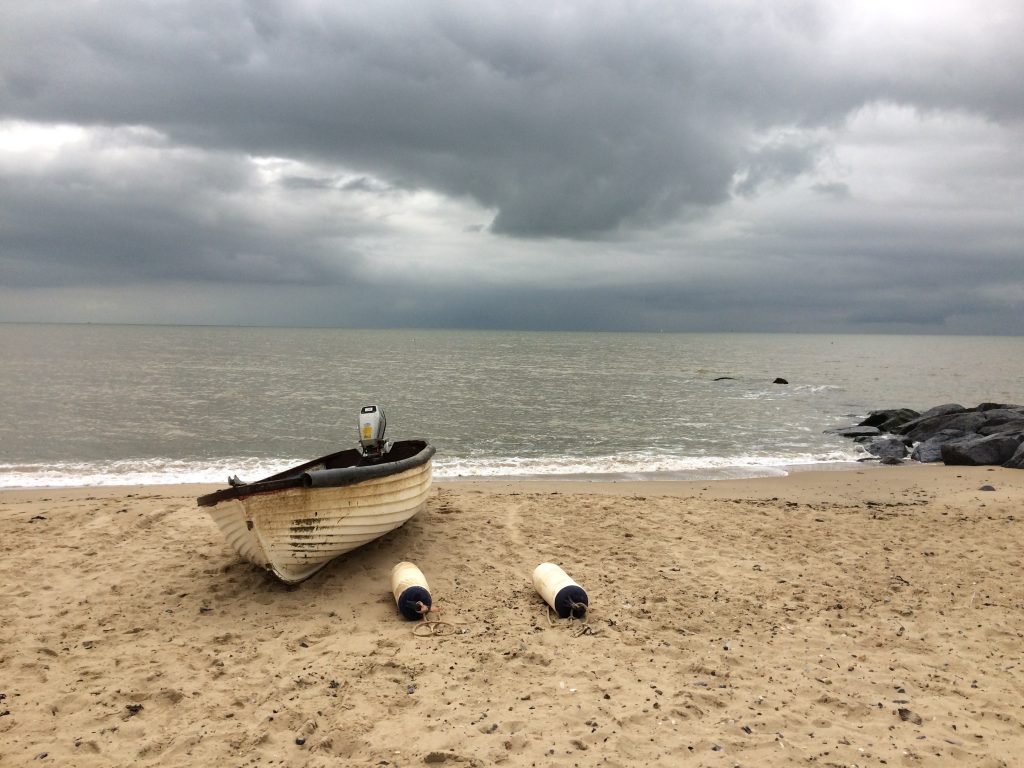 It is May. The North Sea temperature has just crept over 10 degrees centigrade. The sand on the beach is almost warm. In short the lobster season is here. Time for me to push that boat out and catch some of these ineffably strange and ancient crustaceans (they’ve been around for 360 million years), these creatures of mysterious and fugitive habit (the lobster may have  limitations in the brains department but will never be domesticated – she’s a wild one). Although when I say ‘catch’ I am being optimistic. Your life as a lobster hunter is likely to be marked by expense, frustration, disappointment and blind chance. They are in their element, you are not. At some point – assuming you have not drowned – you will certainly think of giving up the trade.

But no, you won’t give up. The magic is too powerful. And because one day, perhaps today, you will haul up that lobster pot and there it will be, that speckled flash of deep blue-black rising from the sea …

But this is to get ahead. First we need to go back almost half a billion years, when the ancestor of the lobster swam the Panthalassic Ocean. Aegirocassis benmoulae was about seven feet long and at the time by far the largest animal in the sea. It swam forwards, unlike the lobster we know that propels itself backwards with a snap of its massively muscled tail, and instead of claws it had delicate filter feeding fans designed to sweep up plankton from the warm water. But it was recognisably the ancestor of the lobster. It had a long segmented tail, and eyes that are unmistakably the eyes of the lobster.

Aegirocassis in turn had ancestors that were predators, but like the later whale shark and the blue whale it turned to plankton feeding simply because there was so much ocean plankton in the Ordovician period when warm water covered most of the earth. In what might seem like a regression, Aegirocassis has today evolved back into the predatory and sometimes cannibalistic lobster; its gentle filter flaps have became massive claws that can exert a pressure of 100 pounds per square inch, which if not quite enough to sever your finger certainly feels like it.

So this is the creature we are dealing with. When you are standing on the shore ready to launch the lobster boat, wondering whether the contest is a fair one, you might remember the lobster’s readiness to turn on its fellows and carve them into tasty pieces. You might remember their ruthless and indiscriminate nature, along with the fact that their blood is green-blue, and that they want your fingers.

And what is more, that they are delicious. 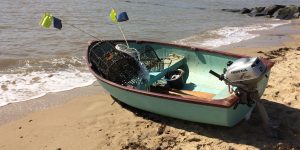 Fishing for lobsters looks simple enough. You bait a lobster pot (a metal cage designed to be easy to get into but difficult to exit) and drop it into about 20 feet of water not too far offshore. The pot sits on the seabed under its own weight and is marked with a buoy and a flag that bob on the surface. Wait for two or three days – consensus in the lobsterman community is that three tides is the minimum time before revisiting the pot, but it can be much longer. When the weather is harsh and the waves are too violent to risk a small boat you might have to wait for days or weeks for a window: a lobster can survive for a long time inside the trap, feeding on scraps of decaying food that drift through or any careless fish or prawn unlucky enough to visit the lobster’s prison.

And this is where your challenges begin.

There are days of calm in the North Sea, when the wind drops, when the sea surface falls flat and eerie and the water clears as if by chemical action. But those days are few. More likely you must take a risk with the waves. You count the number of breakers – the white horses – on the heaving surface and say okay, give it a go. Out beyond the breakwaters where it suddenly grows colder the boat pitches down into the trough, and then up at the bleak sky. Hauling the pot and levering it into the boat is an extreme balancing exercise on a quaking floor, with the added possibility of being tipped into an unfriendly sea.

And that is if the pot is where it is supposed to be. Lobster pots are not anchored, and in rough seas they will move as the buoy dances them across the seabed. Just a few feet further into deeper water is enough to make them disappear. The marker buoys detach too – sometimes undone by the tireless sea which can unpick any knot, but more often severed by a yacht or a speedboat (speedboat owners have highly selective vision). When that happens your expensive pot is lost forever – ghost fishing they call it. 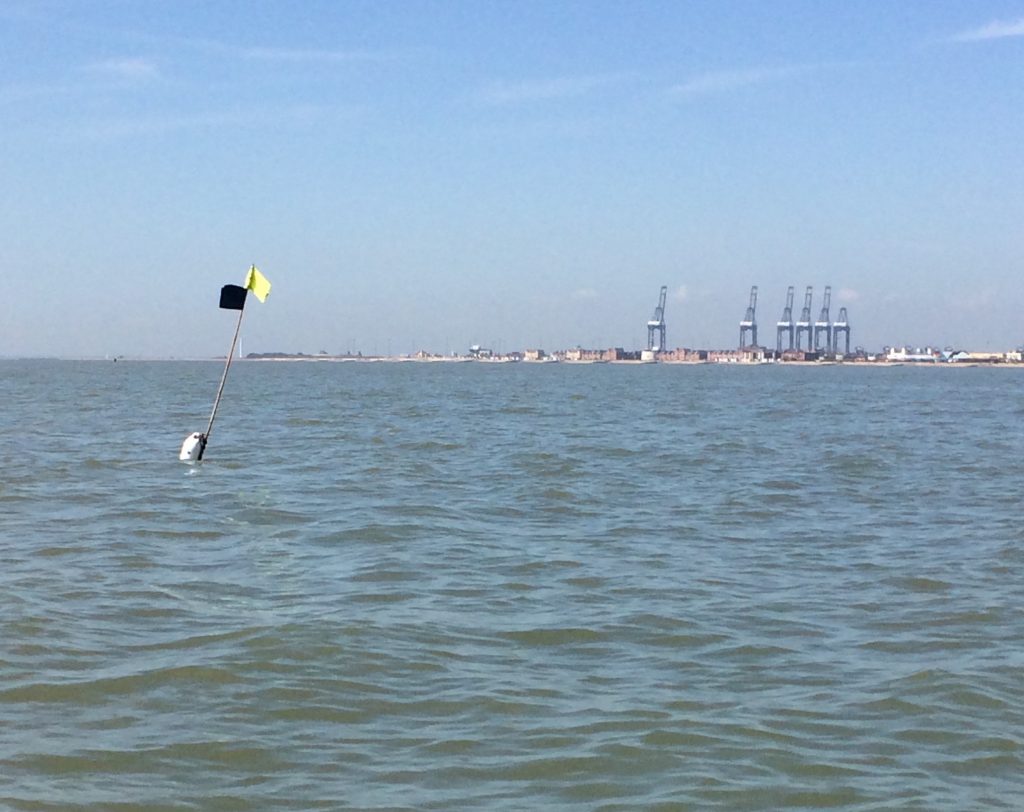 Not that a pot will last for very long in any case. The sea is a time acceleration machine: anything you put into it will age at about ten times the rate it would on land. The salt water strips any protective coating on the metal cage and dissolves metal bars as if they were candy, while the current grinds the pot against the rocky sea floor. More than once I have pulled up a pot to find it empty with every scrap of bait eaten and metal bars that not long before had been soundly welded now gaping open.

These are the terms of the lobster fishery. It is cold and risky. It is costly – think gear, boat, engine, fuel. It frequently produces nothing. This is why lobsters are expensive; not because lobsters are scarce but because the fishery is arduous and the rewards are uncertain.

But the uncertainty is where the magic is. The moment you recover a lobster pot is a strange one. First there is just the rope, disappearing into wave. Then rising from the murk you glimpse the blurry form of the pot. And then it is dripping on the gunwale of the boat, a maze of black bars, shells of whelks and scampering crabs. The lobster that is clinging to a corner of the pot is the thing you see last, as if suddenly condensed out of seawater itself.

The lobster! At that moment the lobster is all that counts. 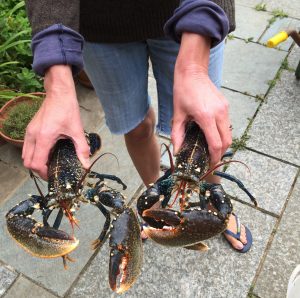