THIRTY years ago Jacques Yves Cousteau was reckoned to be one of the ten most recognised individuals in the world. This biography, uncritical but revealing, shows how that happened.

Nominally a captain in the French navy, Cousteau spent most of his working life pioneering an entirely new form of celebrity, that of the TV explorer. With his ship, the converted wartime minesweeper Calypso, and a crew of divers with attractive French accents and film-star looks, he patrolled the more photogenic corners of the world’s oceans and documented these exploits in books and documentaries that turned him into a global godfather of undersea adventure.

The secret of this success was nothing to do with the science of oceanography or indeed the science of anything. It was to do with television. In The Undersea World of Jacques Cousteau, the documentary series that ran from 1968 and was shown all over the world, and its successor, The Jacques Cousteau Odyssey, Cousteau hit on the thing of which every TV producer dreams: a near-perfect small screen formula.

First there was the boat, Calypso. With its attractive lines glowing a telegenic white against the dark ocean, Calypso was an enclosed world, a drama in itself.  So a typical Cousteau documentary would always begin with scenes set in the cosy and claustrophobic dining cabin, as the divers and scientists planned their next adventure, little suspecting the surprises that awaited them in the cold, cruel world beyond.

Then there was the technology. Cousteau was a genuine innovator, having had a hand in developing the underwater breathing apparatus he called the ‘Aqualung’ as well as refining techniques for underwater filming and dreaming up nifty little one- or two-person submarines. But most importantly he insisted that the technology looked good, and especially, that it looked good on film. As a film-maker he was not competing with universities or research institutes – he was competing with Thunderbirds and James Bond, and he knew it.

And then came the adventure. Every episode made some claim to serious scientific purpose, but the demands of television docu-drama meant that sharks, dolphins, whales and buried treasure made very frequent appearances in the schedule. So Calypso would arrive in yet another shark-infested sea. Divers would descend, smiling and joking. Then, suddenly, there was danger … but you could be sure that in the end the divers would be back around the dining table, the wine would flow, and up on the bridge lit only by the ghostly glow of the radar scanner, Captain Cousteau would be plotting course for next week’s adventure.

So it may come as a surprise to those who 40 years ago grew up with the Captain and his almost mythic patrol of comrades that during the years of his great celebrity, Cousteau was rarely on board the Calypso. He had a helicopter landing pad built on the ship, ostensibly to enable aerial photography, but in reality to enable Cousteau to fly in for an occasional hour or two of filming, later to be spliced in to make it appear that he was directing the voyages of the exploration team. Many episodes of the show were actually a fricassee of archive footage spiced with more recent shots, and the most dramatic moments were not infrequently staged.

So where was Captain Cousteau, while Calypso roved? The Cousteau name had become an international brand, and by the 1970s Jacques Cousteau was effectively a multinational CEO. He divided his time between capital cities, lecturing, lobbying on environmental issues, and working furiously to raise money to fund Calypso’s adventures.  He divided his time in other ways too: on the death of his wife Simone in 1990, the Cousteau children were surprised to discover that for almost 20 years Jacques Cousteau had maintained in secret a second family – a family that now controls the Cousteau estate and legacy. 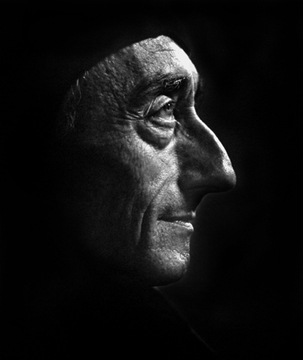 The double life was perhaps not unfamiliar to Cousteau. What, for example, what was he doing during the second world war? Although living under the collaborationist Vichy government he seems to have avoided serious military service. The company that helped him develop the Aqualung was part of the Nazi military machine, and his brother was a prominent Nazi sympathizer who was sentenced to death after the war (later commuted to life imprisonment). Yet Jacques Cousteau was awarded the Legion d’Honneur for services to the French Resistance. The impression is of a man accustomed to navigating murky waters.

So what is Cousteau’s legacy? If you consult the index of The History of Oceanography, a scholarly account published at the very height of his fame, you will find no entries at all under ‘Cousteau’.  If his name appears at all in the scientific record, it is only in passing. His real contribution was to stoke the popular imagination with images of life beneath the surface of the seas, as seen by men in well-tailored diving gear.